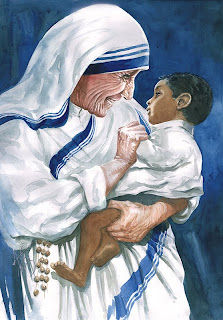 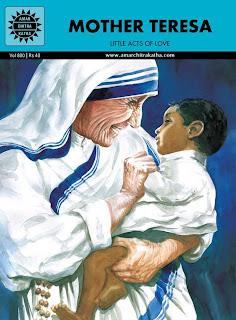 This is my first Biographical Comic Book. From childhood I used to read biographies, and some I preferred to fiction. I believe that I was inspired to make myself better by reading Biographies. Drawing fiction is easy. Sometimes it can be difficult when it is a famous book. Drawing a biography can be more difficult and it would be even harder if the person is contemporary.

When I received the script and I tried to draw Mother Teresa and failed pathetically. Till I receive this book, I have not really explored Mother Teresa's character. Now I know her better and I regret that I didn't explore her before, not because of the difficulties in drawing her.  Without this commission I could have missed this very special human being.

No matter how hard I tried there were times I felt that drawing her is not possible. I excused myself thinking that her face is familiar to everyone and also it has changed over the time. It was very difficult to capture the common likeness which everyone recognized. But I explored her life more and more, first out of curiosity and soon out of great respect.
Though she was internationally famous she was not a complex personality. She lived a very simple life, but her personality was very rich. More I read about her more I got attracted to her personality. I started to feel that more than everything else, it was her unconditional love which makes 'The Mother".
She says, "Even the rich are hungry for love, for being cared for, for being wanted, for having someone to call their own. "
If she loved only the poor her love is not so great. She loved everyone for everyone suffers. Not only the poor the rich too suffer. She says that if lonely Rich too are poor. "Loneliness and the feeling of being unwanted is the most terrible poverty." She loved both rich and poor.
Over the time her face changed, her responsibilities changed but she was the same little girl who loved the suffering and did her best to help. .
Mother's service was not admired and praised all the time. She faced great adversity. When I search the net I came across many articles written by  negative people who couldn't really understand her. But it was interesting that some have blamed her for what she implemented for the good of others. One had written "Mother was very concerned that sisters of her mission, preserve their spirit of poverty".  As a follower of Buddha's path of Dhamma, I can see that the way Mother Teresa had asked her sisters to live is much similar to what Buddha wanted his monks to follow. One begging bowl, 3 pieces of robe, not preserving food for next meal, a temporary shelter and traveling for the good of others.
Those negative articles were not convincing anything negative about Mother. It was clear who was bad. Nothing could subdue her service of love.
Her vision was clear and unchanged over the time because love is the base of her life and the base of the existence too.. In the beginning though I had tried to capture her features I realized that it was not the features people saw. It was her love they felt and without that it was not her. That difference I noticed even looking at her photographs.
That was the missing link in my drawing which possibly made our editor Reena say "She doesn't look like Mother Teresa at all", When I start to feel Mother Teresa more and more, drawing her became easier than before, but never became easy. My artistic skill also is not strong enough to capture what I felt of Mother. I redrew some frames even after inking. I drew the face of her in the last frame quite a few times, to get what we have last.. still lot of room to make it better. How can one portray, such a great human being who is always ahead of you.
I found that I grew in skill as an artist also by trying to portray her to the best I could. But most important aspect is the growth of Mother Teresa in me no matter how minute that could be because it is growth of love.


As I delved deeper into Mother's life, I found that there was too much to write! There were so many things I wanted to say, so many stories to tell, so many people to portray, so many quotes, and so many songs to put in. I agonised over every bit that didn't make it. I can't imagine what I'd have done without Reena at this stage (also at every other stage, but here most of all): probably collapsed into a pool of panic.


When I saw the art though, I was suddenly very happy. I occurred to me that I was fortunate, for the nicest thing about a comic is that it depended not entirely on me, but also on you: and your art took the story up where I left it off, and made it into this lovely, utterly touching thing. Where there were no references, like in Mother's vision, you made the words into this haunting, powerful image. The nuns in Calcutta were all struck by that one page, recognising Mother's words in it immediately.


I don't think I emailed you to say so then, but the cover is perfect. When I think of Mother Teresa, all the research, all the writing, and all the drawing seems to come together in that one image.


Working with you, on Mother Teresa, was indescribably wonderful, and scary, and fun, and I am very very grateful to have had the opportunity.
Posted by Atula Siriwardane